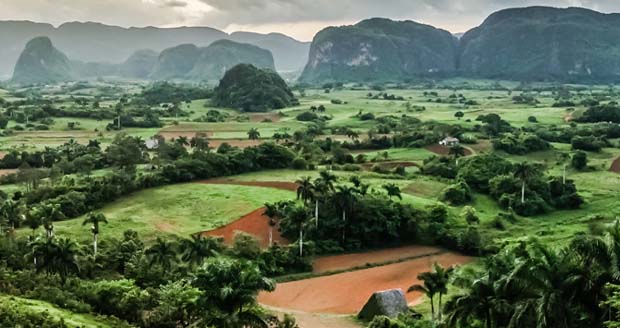 Vinales Valley is the pride and joy of the citizens of western Cuba and probably of all Cubans. It's one of the most visited sites in Cuba. Thousands of visitors visit the Valley, go inside its caves, admire its nature and get to know its culture and particular Vinales cuisine.

Geological research indicates that the valley's well-known "mogotes" (pincushion hills) were the first small islands to emerge in the Pre-historic Caribbean Sea. The numerous fossils that have been discovered support the belief that the whole valley area was once a deep basin rich in fauna and flora in the Jurassic period. In fact, speleological researches in Vinales Valley and particularly in the Cueva de Santo Tomas, developed by the Cuban scientist Antonio Nunez Jimenez in the 5th decade of the 20th century, mark the foundation of the Cuban Society of Speleology. Today, there is a Museum of the Pre-History, near the Mural of the same name, in the Dos Hermanas camping center, where near 300 fossil remains of small and medium size Jurassic creatures can be seen.

To add, a large and unique skull was recently found believed to belong to a ferocious carnivore that inhabited the waters of the primitive Caribbean Sea during some part of the Jurassic period. It's been named Gallardosaurus Iturraldel after its discoverer Juan Gallardo and his son Juanito Gallardo, farmers who have collected an important quantity of fossils in Vinales. The second part of the name is dedicated to Doctor Manuel Iturralde-Vinent, expert in Cuban fossils who completed the research and dating of the specimen.
QUICK CUBA TOUR FINDER
In 1999, the Valley was declared as a World Heritage Site by UNESCO, in the category of Cultural Landscape. Among the reasons listed is the following: "The Vinales Valley is an outstanding, calcic landscape in which the traditional agricultural methods (particularly the tobacco harvest) have been preserved without alteration for centuries. A rich vernacular tradition is preserved as well in the region in terms of architecture, handcraft and music".

From every spot in the valley, the traditional "bohios" (a kind of hut) and guano-sheltered tobacco houses can be seen. Tobacco plantations are, without a doubt, one of the elements which make the sights of the valley most colorful and rich, especially from the Los Jazmines Lookout. On the way to the town, the "Casa del Campesino" (House of the Farmer) can be visited, where you can learn much about the growing, and preparation of tobacco for the so famous Habanos cigars at a traditional tobacco farm.

The Sierra de los Organos, where the valley is located, is a National Park and is currently being considered for proposal as a Biosphere Reserve because of the delicate biological balance and existence of animals and endemic plants. One is the Microcica Calocoma, also known as cork palm, with around a thousand specimens living here; the species was considered extinct since the Jurassic. Among other sites of interest, you can visit the Cueva del Garrafon, the Cueva del Petroglifos, the Cueva del Cura, the Ceja del Negro Valley and the Gran Caverna de Santo Tomas.