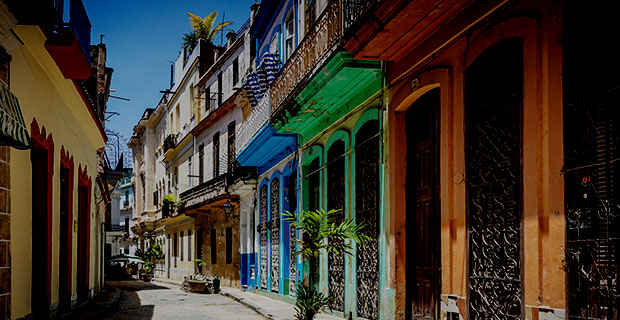 Havana is one of the most stunning architecturally designed cities in the world, with extraordinary variety and quality. Its architecture mirrors its rich social and political history. Contrasts of color and texture are shaped on the facades.

The best examples of early architecture can be seen in military fortifications such as the Fortress of the Royal Force and the Morro Castle dating from the 16th Century. The influence from different styles and cultures can be seen in Havana's colonial architecture, with a diverse range of Moorish, Spanish, Italian, Greek and Roman.

In the 19th Century, Neo-classicism affected all new buildings in Havana and can be seen all over the city. The peak of Neoclassicism came with the construction of the Vedado district (begun in 1859). This whole neighbourhood is littered with setback well-proportioned buildings.

During the first decades of the 20th Century, Havana expanded more rapidly than at any time during its history. Great wealth prompted architectural styles to be influenced from abroad. At the turn of the 20th Century along with Buenos Aires, Havana was the grandest and most important Latin American City.

The lush and wealthy Miramar was set out on the American street grid pattern and became a home to diplomats and foreigners. The railway terminal (1912) and the University of Havana, (1906 -1940) and the Capitolio (1926 - 1929) are good examples of the eclectic style.
QUICK CUBA TOUR FINDER
In the 40s and 50s, many high-rise office buildings and apartment complexes helped dramatically alter the skyline. Examples of the latter are your Habana Libre hotel (1958), which before the Revolution was the Havana Hilton Hotel and La Rampa movie theatre (1955). Famous architects such as Walter Gropius, Richard Neutra and Oscar Nieymer all passed through the city while strong influences can be seen in Havana at this time from Le Corbusier and Mies Van de Rohe.

Since 1st January 1959, Havana's skyline has hardly altered. Habana del Este (1959 - 61) was an innovative housing project that represents the theoretical ideas, which were in vogue at the time and the type of architecture the early revolutionary government were endorsing.

There are some outstanding projects of this period such as the CUJAE University Campus (1960 - 64) the Cuba's National Art School (1961 - 65). This brainchild of Che Guevara demonstrated a search for new forms of artistic expression. Designed by Ricardo Porro, Vittorio Garatti and Roberto Gottardi whom have been commissioned to complete the work recently.